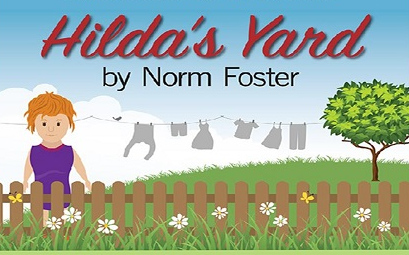 It’s an exciting summer day in 1956 for Hilda and Sam Fluck. Newly on their own since their thirty-something children Gary and Janey moved out, they are finally ready to relax. Hilda plans to hang her laundry while Sam goes to buy a shiny new television. What could disturb their simple peace?

Well, it's a bit disturbed - Hanover Community Players need to find an actor to play Gary in our amateur production of Hilda’s Yard as our previously cast actor is unavailable due to rescheduling the show from 2020.

Gary Fluck is about thirty-three and apparently on the run from thugs.  He has been searching for himself ever since the war 11 years ago.  He’s been fired from his ‘food industry’ pizza delivery job.  Happy-go-lucky, he comes up with schemes to better himself.  He is enamoured with his new girlfriend, Bobbi.

Due to Covid, HCP has permission to film Hilda’s Yard and they plan to do it outdoors. Projected film dates are in May.  Rehearsals will start via Zoom.

Norm Foster’s heart-warming and relatable family comedy proves that there will always be a significant weight to an empty nest.